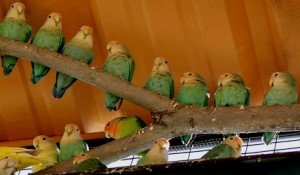 This beautiful habitat with its stone foundation and boma columns encompasses nearly 20,000 cubic feet, allowing its residents the freedom of flight. The bird collection includes a variety of exotic and diverse birds. Colorful species sing attractive songs and make unusual vocalizations, such as those of Grevy, an African guinea fowl.

The aviary gives you the opportunity to view the social interactions of a large group, such as a flock of peach-faced lovebirds, or the ring-necked doves, also known as the Cape turtle dove. 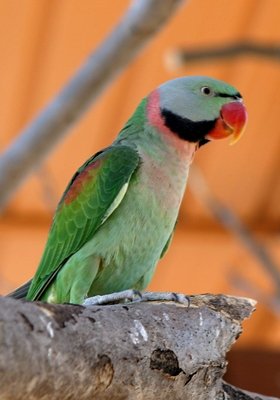 On the more colorful side, you’ll notice Glossy & Inkjet, our 2 lesser blue-eared glossy starlings, who have indigo coloring just as their name implies. Make sure to say hello to Mr. M, an Alexandrian parakeet, named after Alexander the Great who exported numerous specimens of this bird from Punjab, India, into various European and Mediterranean countries. They were considered prized possessions for the nobles and royalty of the day.

While you’re chatting with Molili and Arusha, a mated pair of African grey parrots, you’ll notice four huge boma columns. Boma is a Swahili word for a barrier made of branches and sticks designed to keep lions and other predators from killing domestic livestock. In the aviary, the boma columns are designed to provide housing as well as chew toys for enrichment. The air is alive with bird activity and song.

﻿
© 2022 Out of Africa Wildlife Park — Web Design by Jacob Tyler —Photography by Kathleen Reeder
Camp Verde, AZ | 928.567.2840#OutOfAfrica Follow us on TripAdvisor!Follow us on Facebook!Follow us on Twitter!Watch us on YouTube!Follow us on Pinterest!Follow us on Instagram!