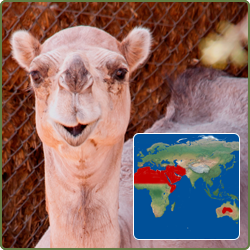 Humphrey was born in Texas in 2006 and came to live at Out of Africa Wildlife Park in August 2007. Always eager to say hello and welcome those delicious treats from daily visitors on the safari tours, Humphrey is a beloved treasure of the park. Interestingly, Humphrey is somewhat of a loner, preferring the company of people to other animals. He also enjoys playing with his big blue ball that he pushes about with his nose and feet. His favorite treats are pears and sweet potatoes. And while Humphrey loves to be sprayed with water on his hind side during the hot summer, he hates the rain. Go figure.

Its native range is unclear, but it was probably the Middle East, Northern Africa, and East Asia. The species exists only in the domesticated state in Arabia today, introduced into other regions of the world, such as Australia and Namibia. The world’s only population of dromedaries exhibiting wild behavior is an introduced feral population in Australia.

Camels are even-toed ungulates (hoofed animals), also known as Artiodactyla. They can weigh between 660 and 1,500 pounds. With a shoulder height of 5 ½ – 7 feet, their body length is about 10 feet. Males are considerably larger than females, and even have an inflatable soft palate which they use to attract females. Both sexes have a single hump on their back, which rises about 30 inches out of the body. The hump is a flesh mound not supported by bones that acts as a reserve where fat is stored. It is bound together by fibrous tissue. Contrary to popular belief, the hump is not used to store water. Its size will vary with food supply and working conditions. The wooly coat that looks shaggy from shedding can change color to adapt to the environment; sometimes it will appear caramel or beige. The heavy fur and fatty hump serve as insulation preventing the body temperature from reaching the sweating point, a major cause of water loss. The long, slender legs keep the camel farther from the hot ground. Camels have two toes on each foot, appearing like flat, leathery pads. The upper lip is deeply cleft, with lips thickened to withstand the coarsest desert plants. Eyes are heavily lashed, adapted for wind-blown sand. Nostrils are slit-like, another adaptation to help keep sand out and return water vapor from exhalations to the body. Amazingly, the camel body can tolerate a 14-degree swing, from 93 to 107 degrees Fahrenheit. Camels are also able to drink brackish and salt water.

Gestation is between 12 to 13 months. For the male, sexual maturity is reached at 5 years, 3 to 4 for the females. The life span is about 40 years. A typical birth will result in a single calf, rarely two. A calf can move freely by the end of its first day. A mother will nurse her young for one year and skip every other year for breeding.

During rutting season the males protrude a fleshy fold from the mouth and emit a loud, unpleasant roar. Like a giraffe, the gait of a camel is done by moving the legs on one side of the body at the same time, then doing the same on the other side. This way of walking makes the body swing from side to side as the dromedary walks ahead, hence the nickname of the animal: “the ship of the desert.” Camels can run up to 40 mph in short bursts and can sustain speeds of 25 mph. They have a reputation for being bad tempered and can spit and kick when annoyed.

Their feeding behavior is adapted to living in the desert. The dromedary will eat almost any vegetation they can find, including salty plants rejected by other grazers. They are capable of eating thorns of the acacia tree. When hungry, they will eat fish, meat, bones, and even skin. In captivity, the diet of a camel is generally hay, grains, and vitamin supplements.