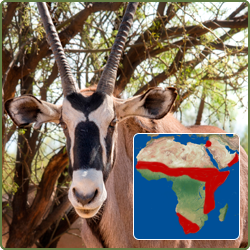 With a unique black dot in a white butterfly pattern over his left eye, Chobi is easy to spot in a herd and distinguishable from his two sibling brothers. Even without his markings he’s easy to recognize as the first to your vehicle looking for snacks. The bravest of the three boys, Chobi is very particular about how he eats his hay. If it’s not broken apart enough, he will use his horns to properly separate the hay into smaller pieces. This explains why you may notice one of our gemsboks wearing a hat of hay on your visit. Chobi has been enjoying the spacious Serengeti at Out of Africa Wildlife Park since July 11, 2004, when he first arrived and graced us with his striking features.

As one of 3 African species of the oryx genus, the gemsbok, or gemsbuck, can be found on the grasslands or savannas and on flat or hilly country in the Kalahari Desert in Southern Africa. They are well adapted to the conditions of their hot, arid habitats.

The gemsbok is a large antelope of striking appearance with long spear-like horns. Shoulder height ranges between 3 and 4 feet with a body length between 5 and 7 ½ ft. The male gemsbok is slightly larger than the female, weighing 480 to 570 pounds, while the female weighs between 390 to 475  pounds. While both genders have long straight horns, the male horns are perfectly straight, extending from the base of the skull to a slight outward and rearward angle. Females have longer, thinner horns that have a slight outward and rearward curve in addition to their angle. Gemsboks are widely hunted for their spectacular horns, which average 33 inches in length. The only outward difference between males and females is their horns. For this reason, many hunters mistake females for males each year.

The female comes into heat soon after giving birth. The frequent estrus cycles enable females to produce calves at 9-month intervals. The gestation period for the gemsbok is 8 to 10 months. Females generally give birth to one calf at a time. The newborn will weigh between 22 to 30 pounds at birth, and like other hoofed animals, it will be able to get up and follow its mother just 1 hour old. Calves can feed on their own after 4 months, staying with the parent herd but no longer remaining with the mother. Gemsboks reach maturity in 1 ½ to 2 years. A typical lifespan is 20 years.

Female gemsboks use their horns to defend themselves and their offspring from predators, while male gemsboks primarily use their horns to defend their territory from other males. Gemsboks move in small, mixed groups, or herds of 30 to 40 individuals, but when there are large areas of fresh vegetation, they can form mega-herds of several hundred individuals or more. The herds move to different areas as the seasons change in search of water and food. It is generally the female, or cow, that leads the search for water and food, with the dominant or alpha male bringing up the rear. Gemsbok can reach running speeds of up to 35 mph. When they feel threatened, gemsboks display a unique behavior; they stand sideways to appear larger, with their heads thrown over their shoulder. If this fails to intimidate the enemy, they will use their horns to defend or attack if required.

Gemsbok typically feed in the early morning and late afternoon. Their diet consists mainly of coarse grasses and browse from thorny shrubs. In desert areas they consume thick-leaved plants, wild melons as well as roots and tubers they dig out of the ground. Gemsboks may drink if water is available but can survive days or even weeks without it. Plants growing in arid areas inhabited by gemsboks have also adapted to the hot, dry conditions and either store water or have mechanisms to prevent excess loss. Plants collect dew, gradually releasing it during the hotter parts of the day. Some plants increase their water content by 25 to 40 percent, so when gemsboks feed late at night or early in the morning, the plants provide them with both food and water.

• The horns give the gemsbok their nickname of “spear antelope.”

• The leucoryx (Arabian), dammah (scimitar-horned), and gazella (gemsbok), are all species of the genus oryx.

• Gemsbok have an unusual circulation system in their heads to cool their blood. This is very helpful when you live in the desert!

• Gemsbok can sense rainfall far away and will travel up to 50 miles to feed on freshly sprouted vegetation.

The gemsbok is highly valued as a trophy animal and is an important component of game hunting activities. Ironically, it is this hunting activity, and the economic contribution it makes to the countries in which it occurs, that ensures population numbers are maintained. The majority of the population currently occurs within national parks and private land, and while the gemsbok is not considered to yet be threatened with extinction, its continued existence is somewhat reliant on these areas.