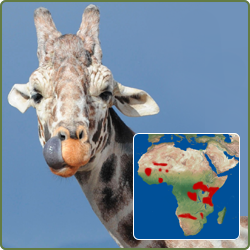 Kibo was born in Florida and came to Out of Africa by way of Ohio in November 2002. Before Kibo was Kibo, his name was Fred. Yes, you read that right! Honestly, who would make up such a thing? We didn’t feel that “Fred” was the best representation for such a majestic animal, so he was given a name more befitting of his size and stature. A name of African origin, “Kibo” means apex, or the highest peak in Africa on Mount Kilimanjaro. Kibo first called Out of Africa home when it was located in Fountain Hills, AZ. Since 2005 he has been enjoying the vastness of his new home in Camp Verde, AZ. Moving Kibo from Fountain Hills to Camp Verde was no small task. Sedating a giraffe is potentially life-threatening, so a special transport was required that would allow him to remain upright during the drive, as well as a route that avoided low overpasses. Kibo is friendly, outgoing, and very curious. His favorite foods include summer squash and carrots.

The giraffe’s scattered range extends from Chad in the north to South Africa in the south, Niger in the west to Somalia in the east. Giraffes usually inhabit savannas, grasslands, and open woodlands. They prefer areas with plenty of acacia trees, which are important food sources, and can browse at heights that most other herbivores cannot reach. Reticulated giraffes, like Kibo, are found mostly in Kenya and parts of Ethiopia.

A giraffe’s color darkens with age. There are seven vertebrae in the neck, just like humans. Giraffe are the tallest living terrestrial and the largest ruminant. They also have the longest tail of any land animal, which can be up to 8 feet long. The circulatory system of the giraffe has several adaptations for its great height. Its heart, which can weigh more than 25 pounds and measure over a foot in diameter, must generate approximately double the blood pressure required for a human to maintain blood flow to the brain. In the upper neck, a complex pressure-regulation system called the rete mirabile prevents excess blood flow to the brain when the giraffe lowers its head to drink. A giraffe’s lungs can hold 12 gallons of air. The prominent horns, or ossicones, formed from ossified cartilage, act as helmets. As males age, their skulls become heavier and more club-like, helping them become more dominant in combat.

The gestation period of a giraffe is 13 to 15 months. Less than 50% of baby giraffes survive the first year due to predation (lions, cheetahs, hyenas, and wild dogs are the main predators of calves). Males will engage in necking to establish dominance or maintain a hierarchy. Males reach sexual maturity at 3 to 4 years but do not breed until 6 or 7 years due to the hierarchy among bulls. A giraffe will live up to 25 years in the wild, 30 years in captivity. The number of young at birth is usually one, but twins can also occur. Babies are 6 feet tall and between 100 and 150 pounds at birth.

Females remain in the mother’s territory and bend over smaller trees to eat. Males live in male groups and stretch their necks to reach the tops of taller trees. Giraffes are usually found in groups of 12 to 15. Male giraffes use their horns to playfully fight with one another. They can defend themselves from predators, such as lions and crocodiles, with a deadly kick. The giraffe has two gaits: walking and galloping. Walking is done by moving the legs on one side of the body at the same time, then doing the same on the other side. When galloping, the giraffe’s front and hind legs work in pairs.

Giraffes prefer areas with plenty of acacia and mimosa trees, which are important food sources. They can browse at heights that most other herbivores cannot reach. Acacia trees have thorns that prevent most animals from eating them. However, the giraffe’s tongue reaches around the thorns, and its thick saliva coats them if swallowed. Giraffes can eat up to 75 pounds of food per day, spending most of the day eating because they only get a few leaves in each bite. Acacia trees contain a lot of water and can allow a giraffe to go a month without drinking. Giraffes are ruminants, meaning they first chew food, swallow it for processing, and then visibly pass the half-digested cud up the neck and back into the mouth to chew again. This process is usually repeated several times for each mouthful.

Overall, the giraffe is assessed as of least concern from a conservation perspective, as it is still widespread and lives in numerous reserves. Giraffe tail hairs are still collected for jewelry, and hide is used to make sandals and ceremonial shields. Two subspecies, the West African giraffe and the Rothschild giraffe, have been classified as endangered, as wild populations of each of them now number in the hundreds. While giraffe populations have declined in Western Africa, they are stable and expanding in Southern Africa thanks to private game reserves.