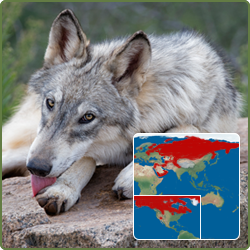 Kanab was born in Kalispell, Montana. He gets his name from the scenic town of Kanab, located in beautiful southern Utah. The geological wonders, rugged beauty, and untamed wilderness of the Kanab area seemed fitting for the 3-week old pup traveling through the township on his way to a permanent home in Central Arizona. Kanab made his 2-day journey to Out of Africa Park with 3 other wolf pups of similar age, one his sibling. As the 4 wolves grew together, Kanab emerged as the alpha male. Unlike a typical alpha, Kanab is not at all pushy or demanding but respected and followed by other members of the pack. When Kanab was a pup, his tongue would stick out whenever he was picked up by the nape of the neck. Of course, that cute reaction was quite involuntary at the time. Now that Kanab has grown older and wiser, he’s learned when it’s appropriate to hold his tongue.

The gray wolf is found in all habitats except tropical forests and arid deserts, mostly in wilderness and remote areas, particularly in Canada, Alaska and northern USA, Europe, and Asia.

The species’ modern range in North America is mostly confined to Alaska and Canada, with populations also occurring in northern Minnesota, northern Wisconsin and Michigan’s Upper Peninsula, and portions of Washington, Idaho, northern Oregon, and Montana. Canadian wolves began to naturally re-colonize northern Montana around Glacier National Park in 1979, and the first wolf den in the western U.S. in over half a century was documented there in 1986. The wolf population in northwest Montana initially grew as a result of natural reproduction and dispersal to about 48 wolves by the end of 1994. From 1995 to 1996, wolves from Alberta and British Columbia were reintroduced to Yellowstone National Park and Idaho. In addition, the Mexican wolf (Canis lupus baileyi) was reintroduced to Arizona and New Mexico in 1998. The gray wolf is found in approximately 80% of its historical range in Canada, thus making it an important stronghold for the species.

Canada is home to about 52,000–60,000 wolves. In Alaska, the gray wolf population is estimated at 6,000–7,000, and can be legally harvested during hunting and trapping seasons, with restrictions. The gray wolf received Endangered Species Act (ESA) protection in Minnesota, Wisconsin, and Michigan in 1974, and was re-classed from Endangered to Threatened in 2003.

Reintroduced Mexican wolves in Arizona and New Mexico are protected under the ESA and, as of late 2002, number 28 individuals in eight packs.

Gray wolves are the largest extant members of its family at 2 to 3 feet at the shoulder and 4 ½ to 6 ½ feet in length. Their weight varies from 65 to 175 pounds. It is similar in general appearance and proportions to a German shepherd, or sled dog, but has a larger head, narrower chest, longer legs, straighter tail, and bigger paws. Its winter fur is long and busy, and predominantly a grizzled gray in color, although nearly pure white, red, or brown to black also occur. They are also one of the most widespread land mammals, inhabiting various ecosystems throughout North American, Europe, Asia, and a small portion of Africa. In general, the size of the gray wolf increases the further north they reside. Wolves trot at 5 miles per hour, but they can run in short bursts at up to 35 miles per hour.

The gray wolf can live in the wild for less than 10 years, but under human care up to 18 years. However, in many areas it has been hunted and killed because it is believed to pose a threat to humans and domesticated animals, such as cattle, sheep, and reindeer.

The gray wolf is generally monogamous, with mated pairs usually remaining together for life, unless one of the pair dies. Usually only the alphas breed to ensure the best genes are past to the next generation. During pregnancy, female wolves remain in a den located away from the peripheral zone of their territories, where violent encounters with other packs are more likely. The gestation period lasts 62–75 days. Wolves bear relatively large pups in small litters compared to other canid species. The average litter consists of 5–6 pups.

Pups are born blind and deaf, and are covered in short soft grayish-brown fur. They weigh .5 to 1.5 pounds at birth, and begin to see after 9 to 12 days. Mother wolves do not leave the den for the first few weeks, relying on the fathers to provide food for them and their young. Pups begin to eat solid food at the age of 3 to 4 weeks. Pups have a fast growth rate during their first four months of life: during this period, a pup’s weight can increase nearly 30 times. Wolf pups begin play fighting at the age of 3 weeks, though unlike young foxes and coyotes, their bites are inhibited. Actual fights to establish hierarchy usually occur at 5 to 8 weeks of age. Sexual maturity is reached at approximately 22 months. Social structure may prevent breeding until older.

Wolves live, travel and hunt in packs of 4 to 7 animals on average. Packs include the mother and father wolves, called the alphas, their pups and several other subordinate or young animals. The alpha female and male are the pack leaders that track and hunt prey, choose den sites, and establish the pack’s territory. Wolves develop close relationships and strong social bonds. They often demonstrate deep affection for their family and may even sacrifice themselves to protect the family unit.

Wolves have a complex communication system ranging from barks and whines, to growls and howls. Scent marking and body language are other forms of communication. Howling is used to communicate territorial cues over long distances. This helps to bring the pack back together when they are dispersed. Each wolf has a distinct howl. While they don’t howl at the moon, they do howl more when it’s lighter at night, which occurs more often when the moon is full.

Activity is diurnal. Wolves often travel long distances in search of food, covering ranges of up to 30 miles per day. Wolves hunt in packs. They hunt by stealth, harassment, and active chase – ultimately attacking the rump, flanks, and shoulders of large prey. Most attempts end in failure.

Gray wolves have been known to pursue prey for as long as 20 minutes covering distances of up to 3 miles. Gray wolves are known as keystone predators because they help maintain a balanced ecosystem. Their diet consists of ungulates (large hoofed mammals) such as elk, deer, moose, and caribou, as well as smaller mammals like beavers and rabbits. Because gray wolves eliminate only weak animals, herds become stronger and healthier as a whole. In fact, studies have shown that gray wolves have helped prevent the spread of chronic wasting disease, a contagious neurological disease, in deer.

Furthermore, in Yellowstone Park, researchers found that the presence of wolves forced herds of elk to move around more frequently, thereby allowing aspen and willow trees to flourish in areas where they had previously been overgrazed. This, in turn, resulted in the return of beavers and riparian birds to the region.

Wolves are predators and as such help control the populations of prey species; however, they have been blamed for also taking livestock species. Studies have shown that these incidences are rare. Wolves have been hunted and trapped for sport, for their fur and for extermination. Many wolf populations have been eliminated from their historic ranges. Modern wolves are also at risk from canine parvovirus, parasitic heartworms and hybridization of the gene pool with coyotes and domestic dogs. Efforts to reintroduce wolfs into some of their historic ranges in the U.S. are meeting with success. There are populations now established in Montana, Wyoming, and Idaho with natural movement occurring into other states.

Canis lupus is assessed as Least Concern by the IUCN, as its relatively widespread range and stable population trend mean that the species, at global level, does not meet, or nearly meet, any of the criteria for the threatened categories. However, some local populations are classified as Endangered, and some subspecies are endangered or extinct.