It is with great joy we announce the birth of Kimbia, a baby lioness born to mother Kayla and father Ted on May 28th. This perfectly timed Mother’s Day gift is Kayla’s second offspring, her first being lioness Kitanga. 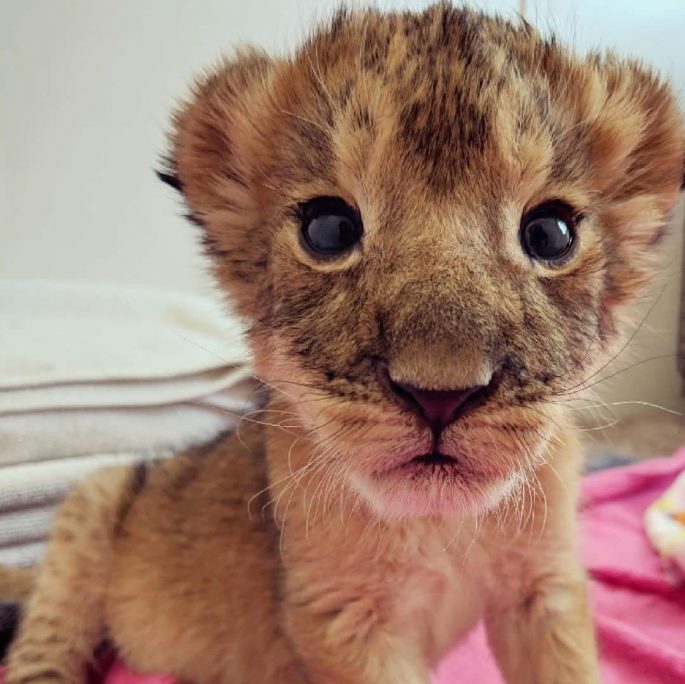 Shortly after birth, Kayla began losing interest in nursing. Out of Africa staff had to intervene by bottle feeding Kimbia to supplement the milk she wasn’t getting. Kayla was not at all bothered with someone else feeding her cub. But after 4 ½ days, Kayla discontinued nursing altogether, and Kimbia had to be pulled for her survival.

Now she a is bottle fed by hand every three hours, day and night. It’s a demanding role to nurse an ambitious lion cub around the clock, so members of Out of Africa’s Core Group and park owner Prayeri Harrison take turns with feeding duties. Raising a lion cub can be exhausting, but it’s such a privilege that there’s never a shortage of volunteers.

While most newborn lions wake up and immediately cry for milk, Kimbia insists there be playtime first. Once she’s had her fill with fun, she then demands her fill of food. This routine will continue as Kimbia grows, and at about three months she’ll be introduced to small pieces of meat or chicken.

Personality-wise, Kimbia is as affectionate as they come. She’s very vocal and insistent, but she has such a sweet demeanor that she causes hearts to melt instantly. “Kimbia” in Swahili means running. While Kimbia may barely be able to put one paw in front of the other at this point, there’s no doubt she’ll have all the prowess of a skilled hunter in no time.