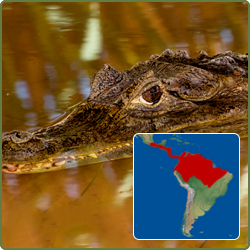 Fisher began calling Out of Africa Wildlife Park home in 2002, 13 years after he was born. Raised in a car, he eventually moved into a house before the reality of raising a caiman became a bit too much for the original, inexperienced owner. Enter the Arizona Department of Fish and Game. Fisher was confiscated and we were contacted as a possible home provider. Needless to say, we were all too happy to welcome our crocodilian friend. While the spectacled caiman can be quite aggressive, Fisher is remarkably gentle.

The spectacled caiman, also known as the white caiman or common caiman, is a crocodilian reptile found in much of Central and South America. It lives in a range of lowland wetland and riverine habitat types and can tolerate salt water as well as fresh; due in part to this adaptability it is the most common of all crocodilian species. It generally prefers areas of still water. South America’s extensive Pantanal floodplain provides a perfect habitat for the caiman during the rainy season, when it is 80% submerged. Caiman crocodiles have the widest distribution of any species in the Alligatoridae family. If environmental conditions become too harsh, they will burrow into mud and aestivate, or lie dormant, until conditions improve.

Males of the species are generally 6 ½ to 8 ft in length, while females are smaller, usually around 4 ½ feet. Adult males can weigh as much as 140 pounds. The species’ common name comes from a bony ridge between the eyes, giving the appearance of a pair of spectacles. They have been known to change color. During colder weather the black pigment within their skin cells will expand making them darker. A triangular ridge is present on the heavily-ossified upper eyelids, vaguely reminiscent of those on the dinosaur Allosaurus. Younger caiman are lighter and have more distinct cross-bands. For its whole life the belly is a cream to white color and the eyes are gold. The caiman resembles the crocodile in Costa Rica yet is more common. This species is much smaller than the American Crocodile (Crocodylus acutus).

The spectacled caiman will reach sexual maturity in 4 to 7 years. Usually the more dominant individuals will mature more quickly. They will gather and mate during the dry season. After mating season ends the females will build nests out of dense vegetation to insulate their eggs from extreme temperature changes. The size of the nest varies depending on the resources available to the female. Each female can lay up to 40 eggs. Most caimans will nest during the wet season (July-August). It is very unusual to see a caiman nest during any winter months, because of lower temperatures.

As the nest’s vegetation decays it produces heat, which can keep the eggs about five degrees warmer than if they were insulated by mud alone. Temperature not only incubates the eggs, but it also determines the sex of the developing caiman. Caiman do not possess the genes necessary to determine sex. They depend on temperature. When the temperature inside the nest is approximately 87 degrees Fahrenheit or lower, the caiman will become male. However, when the temperature is approximately 89 degrees Fahrenheit or higher, they become female.

Spectacled caiman have strongly protective maternal behavior. They raise their young in crèches with one female taking care more than just her own. The dependent young are cared for communally. Caiman will take care of their young for the first two to four months after the eggs hatch, or until the floods of the wet season subside. The juveniles stay relatively close to their parents for maximum protection from predators for an average of 1-½ years.

Some Caiman individuals can live up to 70 years of age. Typically the smaller species live 30 to 50 years, while the larger species live at least 50.

Spectacled caimans are generally shy solitary creatures, with the exception of mating season when they become aggressive and territorial. They are seen living in small scattered groups all belonging to the same territory. They show very little movements, especially during the daytime when temperatures are high, and often remain submerged in the water. Early in the morning and late in the evening they come on shore to bask. During this period they grasp the opportunity to catch their prey as they naturally hunt in the night.

Spectacled caimans have a propensity to feed on other animals found in the water of their surroundings, which include various types of fish, reptiles, amphibians, and even water birds. Young caiman mostly consume land invertebrates while juveniles prefer snails.  Older animals are capable of taking larger mammalian prey like wild pigs. They usually hunt by stalking their prey, swimming slowly and cautiously until close enough to lunge forward and snap their powerful jaws around a defenseless creature. Another hunting method of this species is ambush, lying in wait, motionless, until an unsuspecting prey arrives. These reptiles are nocturnal, meaning they mostly forage at night. Observations show that as conditions become drier, caimans stop feeding.

• Spectacled caimans use mostly sound to communicate. They are known to be the most vocal reptile.
• Caimans do not posses any vocal cords, hence bellowing is performed by inhaling air into the lungs and releasing it intermittently in deep-toned roars.
• Another mechanism for communication is that of smell. In total the caiman has four sent glands.
• Spectacled caimans have developed body movement as another form of communication. They vibrate their bodies while positioned below the water’s surface, which then produces ripples that travel over large distances. Other bodily movements observed are the slapping of their heads and slashing of their tails on the water surface.

This species benefits from over-hunting of competitive species who occupy the same home range. This allows them access to resources that normally would have been lost to these other species. The skin of the caiman is not ideally suited to tanning, as the ventral scales contain well-developed osteoderms. Only the lateral flanks provide skin of an acceptable quality for tanning. Even still, the number of caimans harvested is significant, currently supplying the vast majority of the hide market in America. The major threat to this species and its subspecies is currently illegal hunting. Smuggling rings operating through Thailand and Singapore are extremely damaging to individual populations, and greater control measures and more effective legislation are needed. The spectacled caiman’s conservation status is currently listed as of least concern.