Last August, when our longtime friend Kibo, the loveable kissing giraffe, passed away, we felt a pure light had vanished from our eyes. His spirit of childlike wonder that illuminated so many had left us wanting. 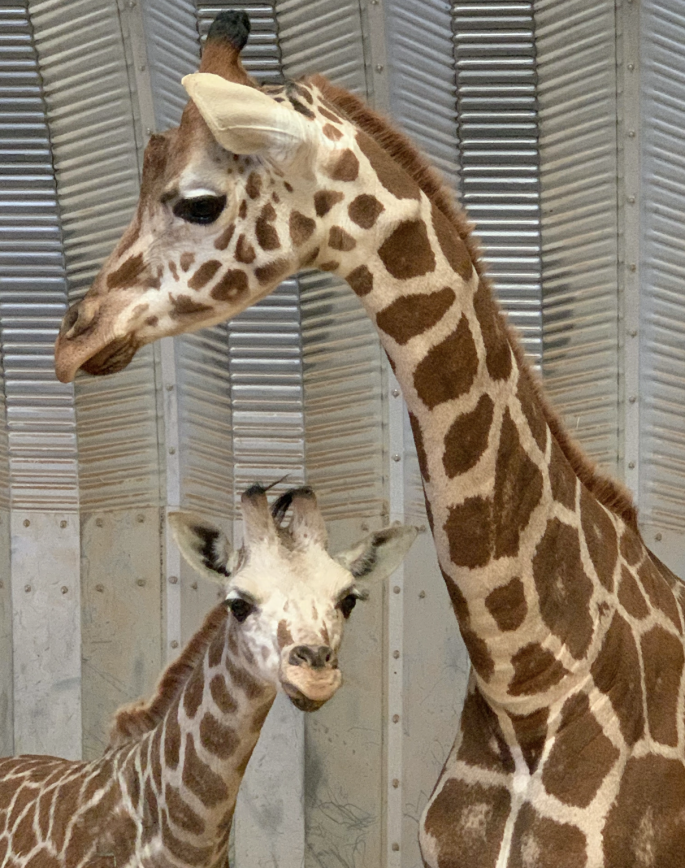 But we knew that just as the sun goes down, it always comes up. On December 29th, a new light shone upon us, in fact, not one but two. They arrived in an extended, grey exotic animal trailer at 8:30 PM. We had been working hurriedly to modify Kibo’s barn to meet the needs of two young giraffes, who would carry forward the baton Kibo left. These two would double the union between man and animals that Kibo began twenty years ago. Their faces are bright and innocent with chocolate eyes, decked with eyelashes only imagined.

They stepped off the trailer with ease to discover a new home in their comfortable barn. We left a dim light on all night so they could see where they were. Both began eating and drinking, a good sign. We checked on them during the night watching remotely on our cell phones, even monitoring the evening temperatures to ensure the barn remained at a steady 72 degrees. The two giraffes stayed in the barn for a few nights and days to allow them to adjust. By the third night, they were lying down in complete peace. Now they are eager to explore their permanent habitat as their new life awaits them – and us!

It is with great joy that Out of Africa proudly announces the newest members to our animal family – Temba and Mawenzi.

The oldest of the two, Temba, stands at nine feet tall. He is ten months old, and his name means “hope” in Zulu – a language spoken in South Africa.

Mawenzi is six months old, standing at seven feet. Mawenzi is the second largest peak of Mount Kilimanjaro in the shadow of its highest peak Kibo – a fitting name for one who would follow after our Kibo. These two, both males, share the same dad but different moms. Their dad is nineteen feet tall, a true giant.

We are truly grateful to all who participated in financial support and love and prayers, so these two wonders of God’s creation could share their wealth of spirit with all of us. The support has been overwhelming and made this day of rejoicing possible. After a week-long quarantine, Temba and Mawenzi are now viewable daily on the African Bush Safari Tour included with general admission, and the Supermog Adventure Tour.

Come! Help us welcome these two into the Out of Africa family.